Making latkes for Hanukkah is one of those things I have to gear myself up for. I know the end result will be great, but I have to get in the mood to make a big mess and smell like oil for the rest of the day. A Hanukkah apron helps. 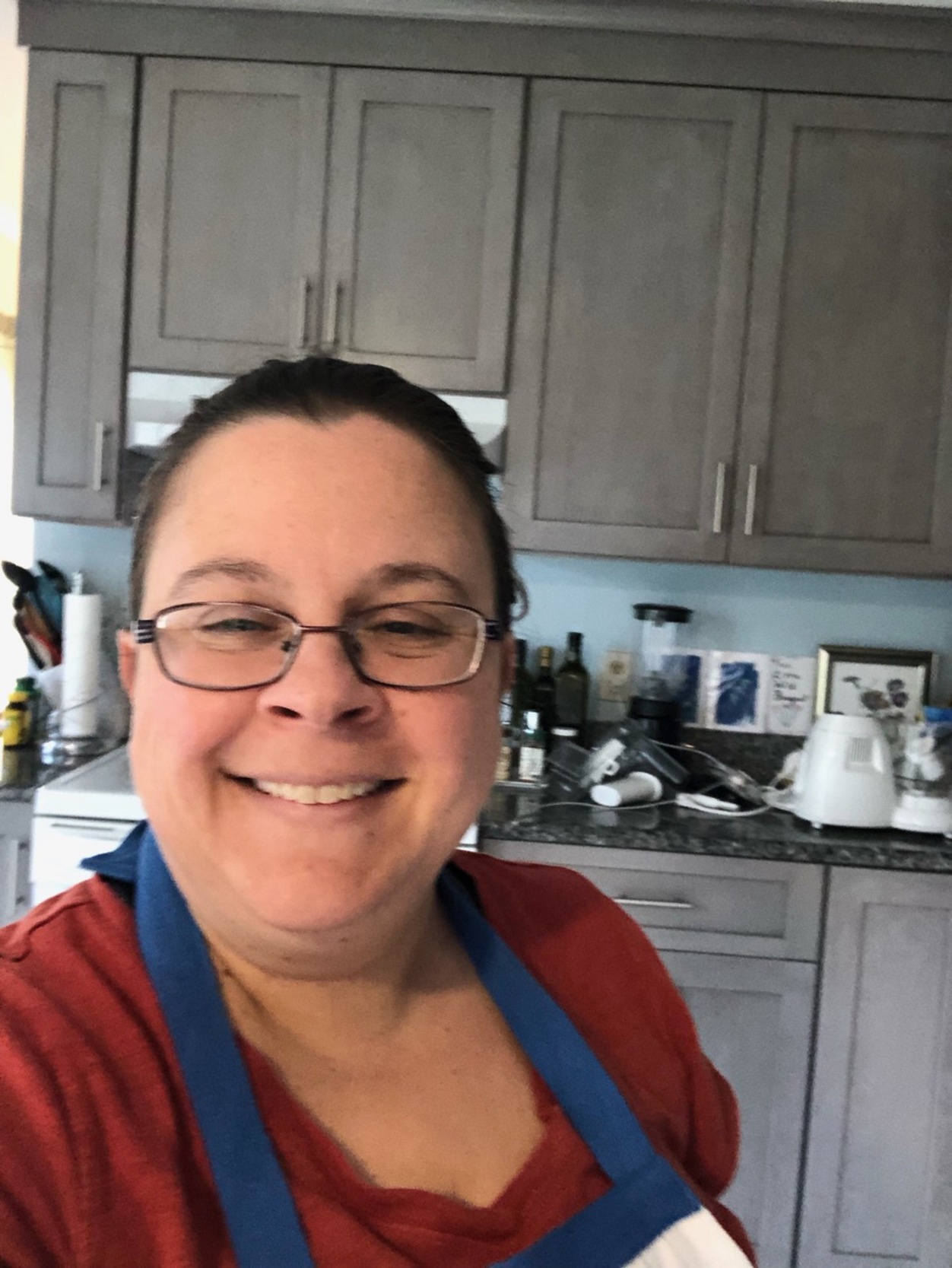 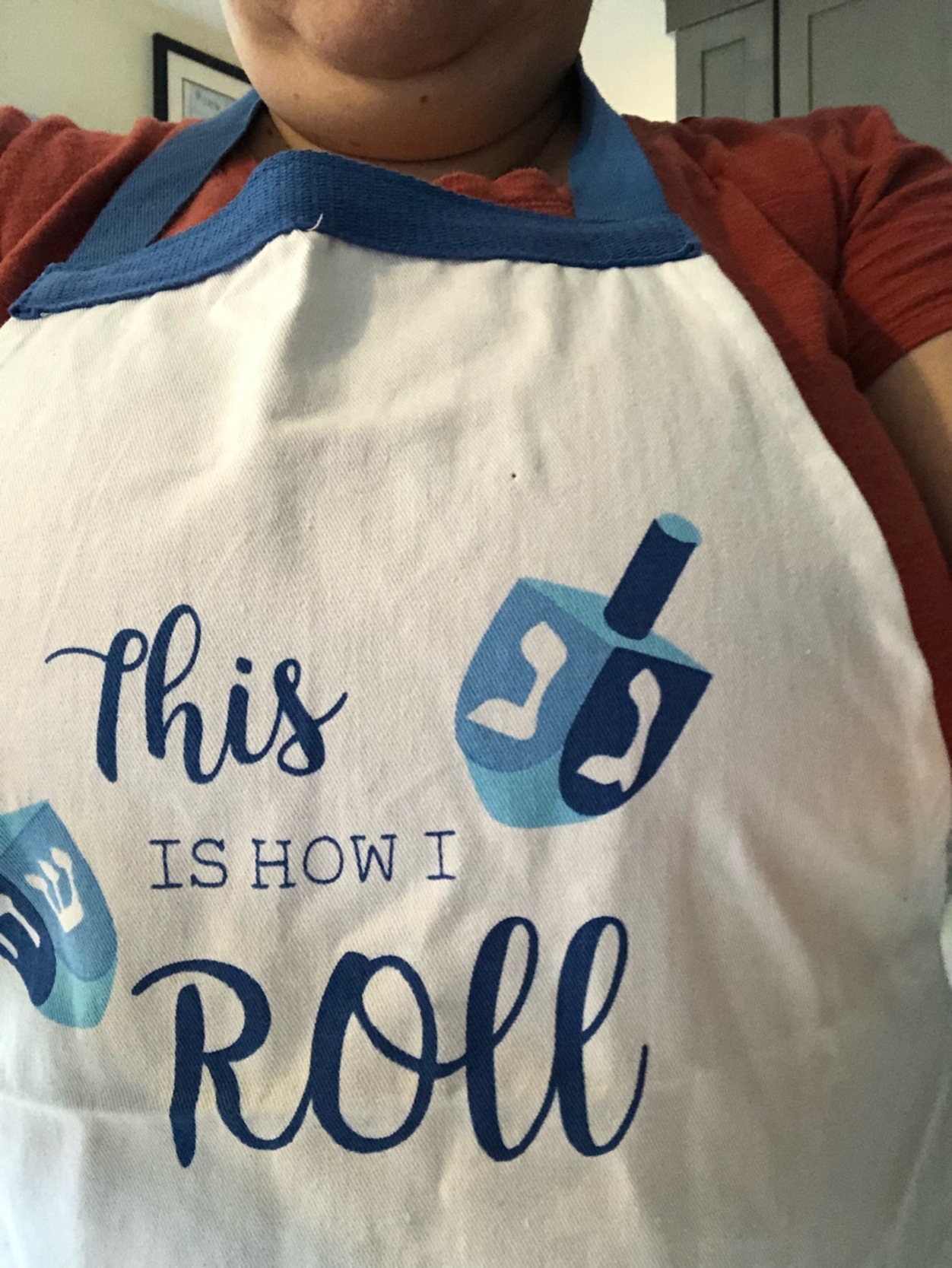 So, there are many, many recipes online and opinions on different ways to make latkes. Really, there are lots of different ways to make them. When I cook, I am not super precise - I use a recipe as a guideline and then just kind of approximate and eyeball the ingredients. Here’s what I used (ha ha, not the Ugly Sweater Chanukah cookie mix, that’s just in the background. 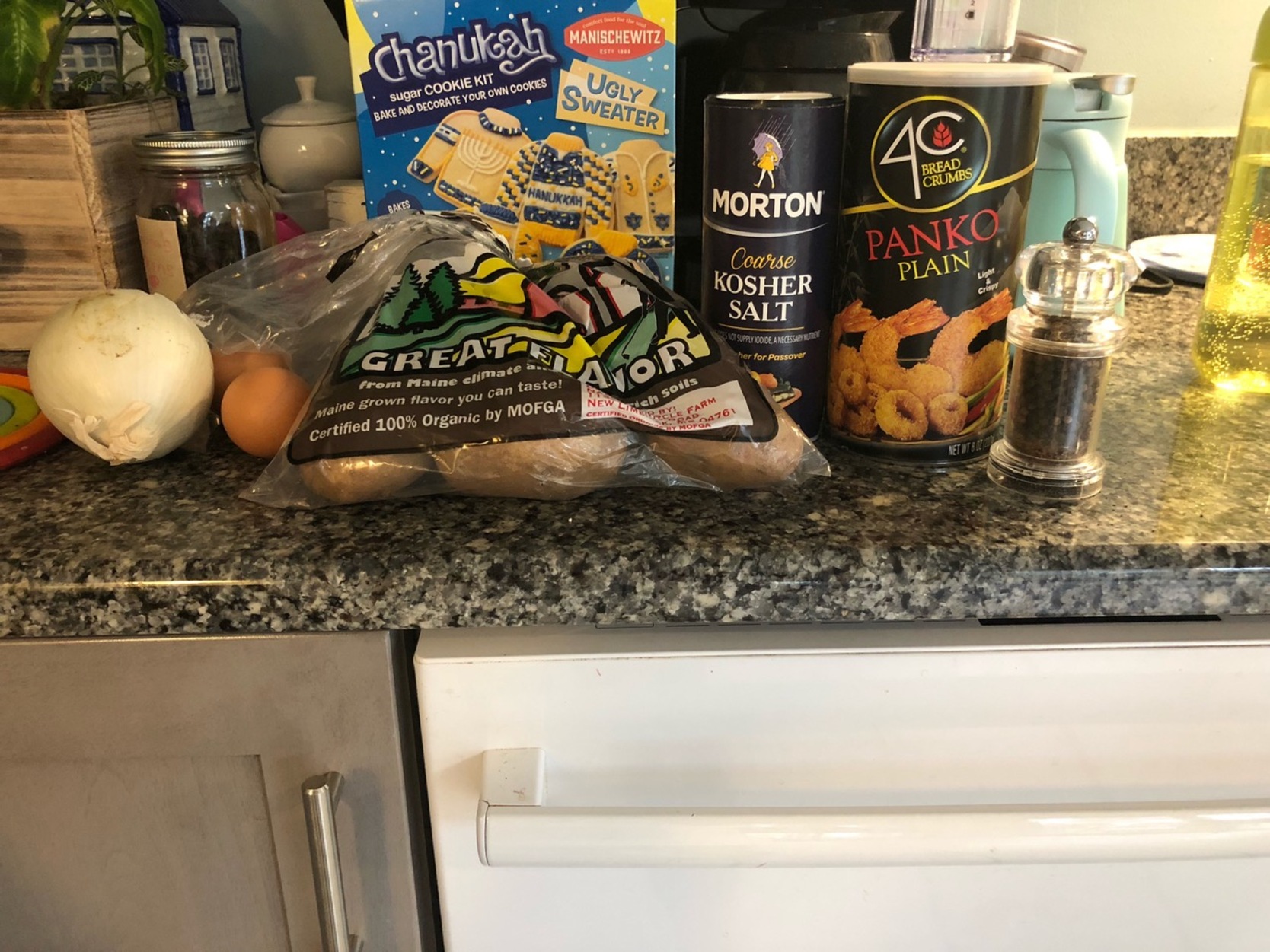 Now, to make latkes, you need a binder to make sure the onions and potatoes stick together - that’s where the egg and panko come in. Okay - confession - the best binder to use is matzah meal. But, I didn’t have any in my pantry. So I substituted panko. You can also substitute crushed up saltines or unflavored breadcrumbs. Try to avoid flour - that can make the latkes more gummy than crispy.

So - to peel or not to peel the potatoes. There are devotees for both sides - depends what texture you like. I peeled my potatoes. I used 2 pounds of russets (what was left over in my 5-pound bag from Thanksgiving). Peel them and put them immediately into cold water so they don’t turn brown. 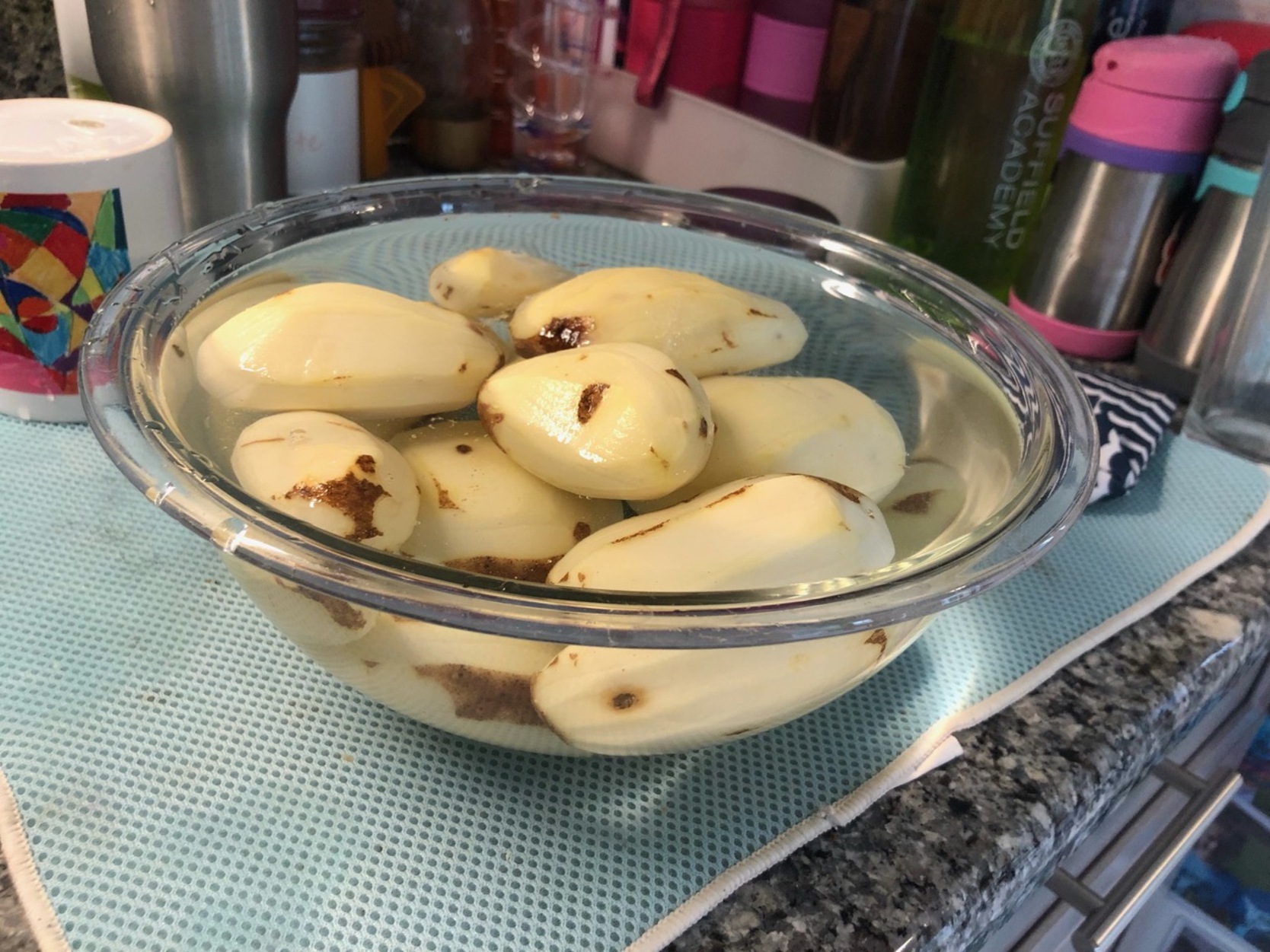 With two pounds of potatoes, I used one onion. Get them sliced up lengthwise on your cutting board, then introduce them to your best friend, the food processor. 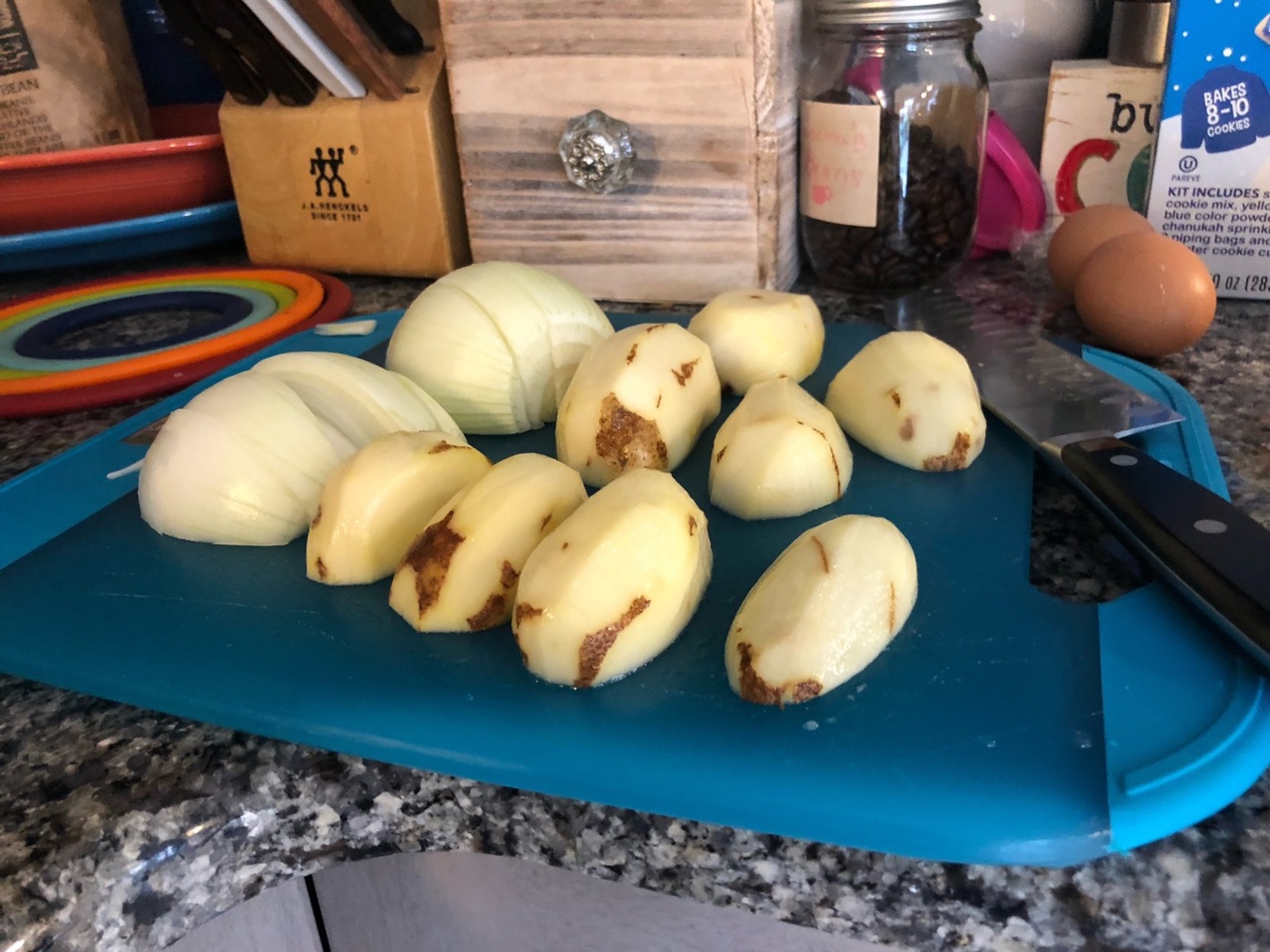 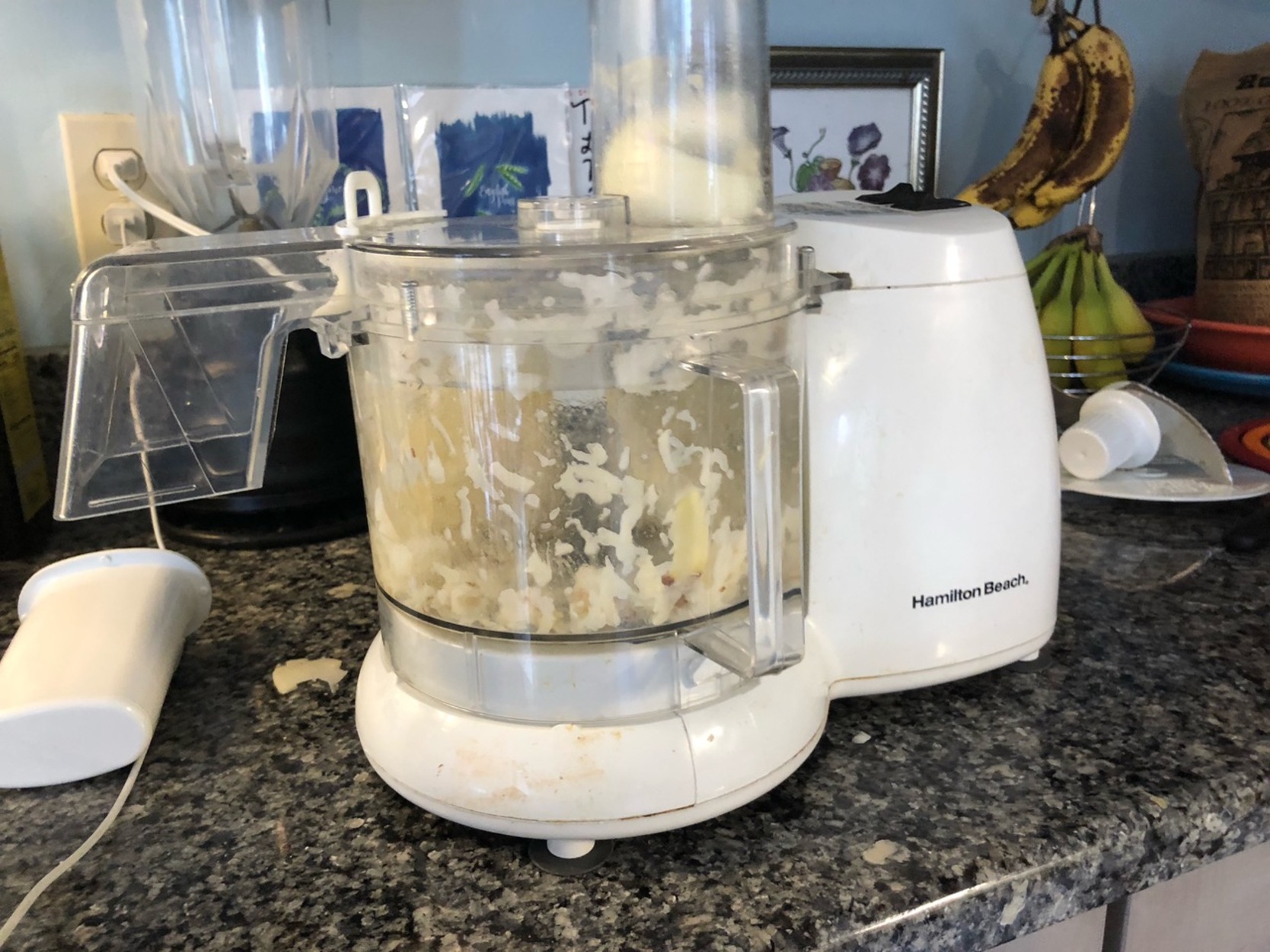 Now, you can grate these with a box cutter, but it is truly a labor of love, and you might injure a few knuckles. I definitely recommend a food processor. I used the shred setting; you can also use the grate setting. When I was done, it looked like this. And I was also crying from the onions. 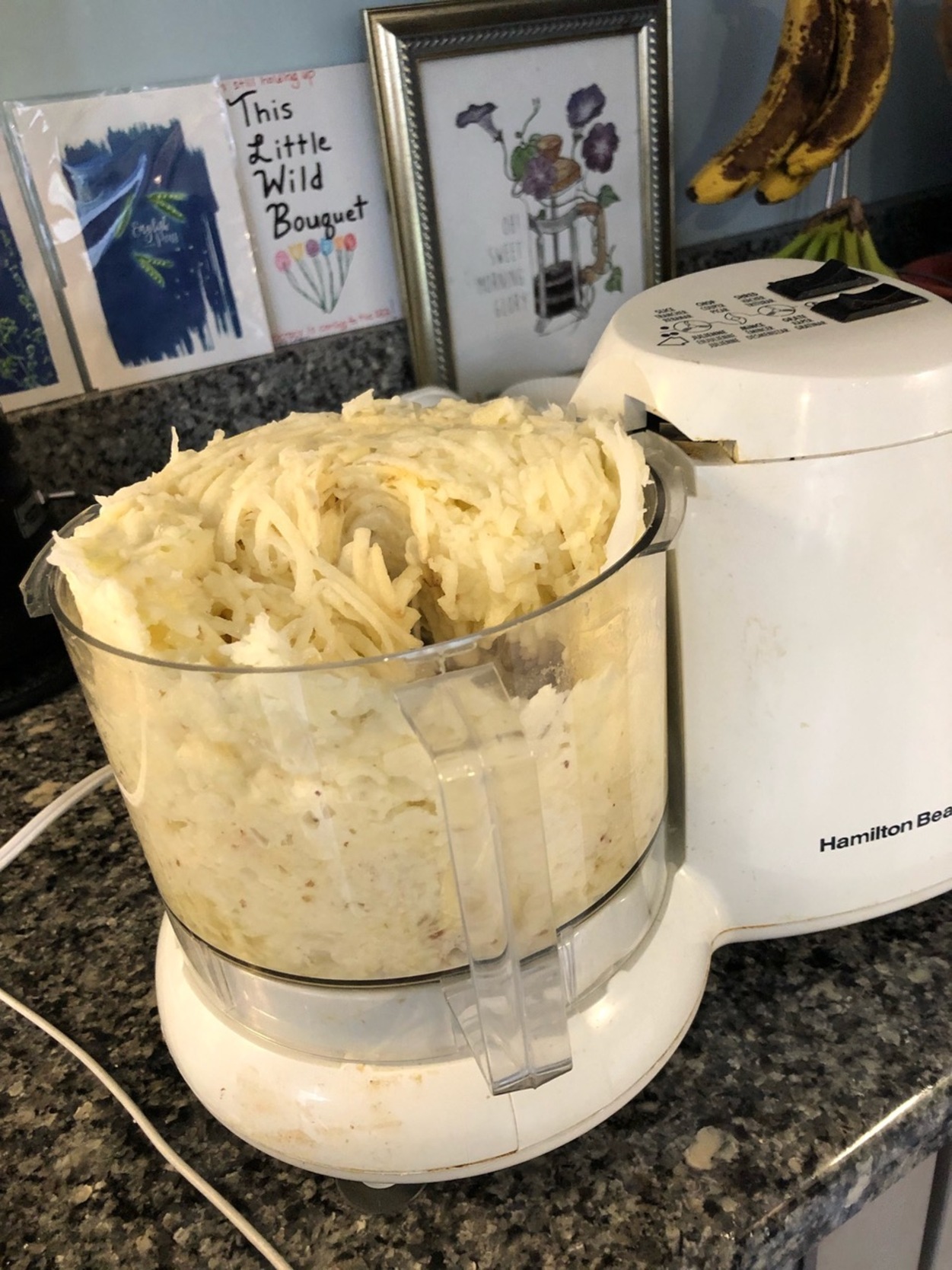 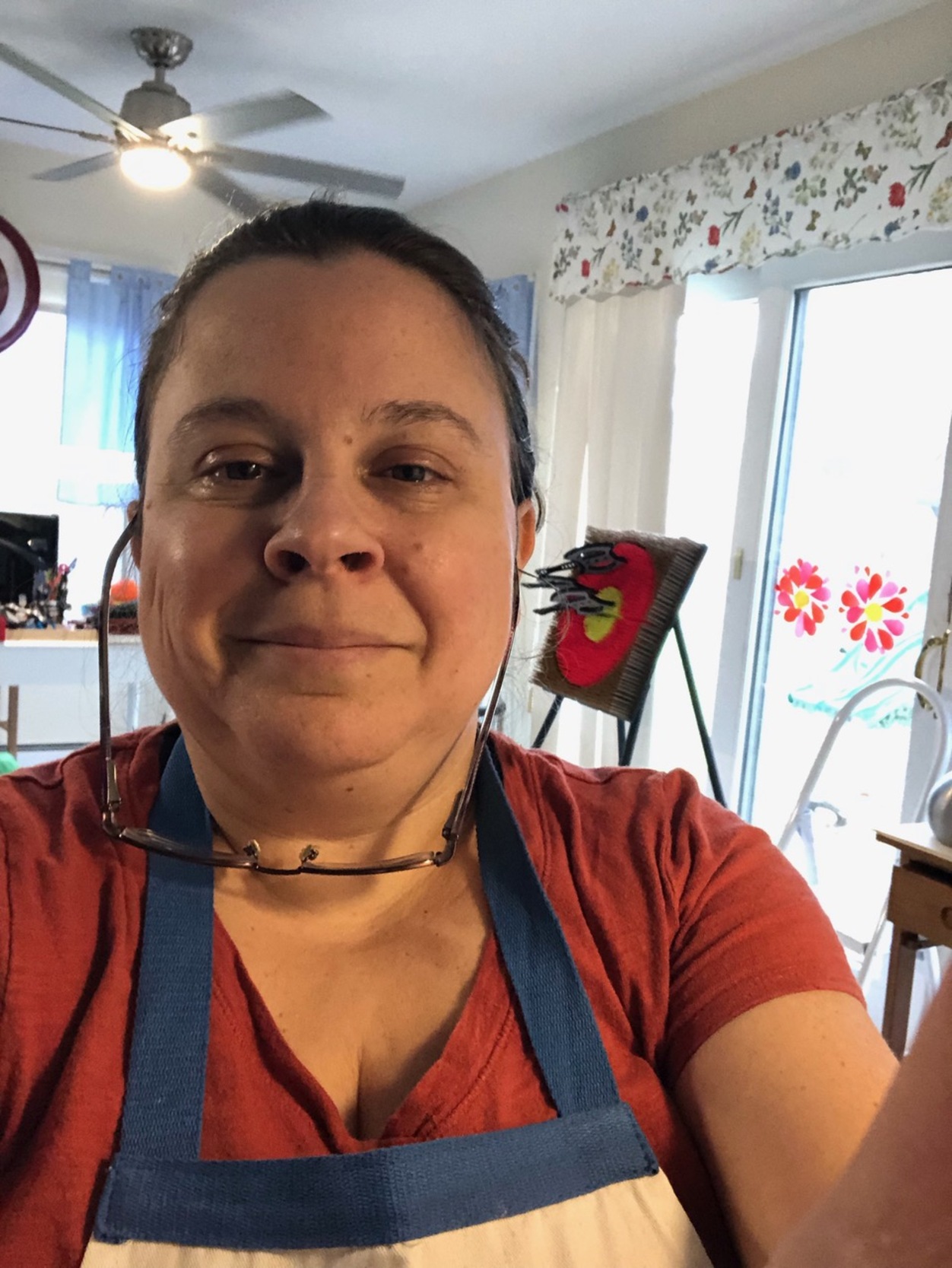 Now comes the tricky part. You have to squeeze the liquid out of your potato/onion mixture or the latkes will not be crispy. Cheesecloth is ideal, but, you guessed it, no cheesecloth. I used a pastry cloth instead. Put it inside a large bowl. 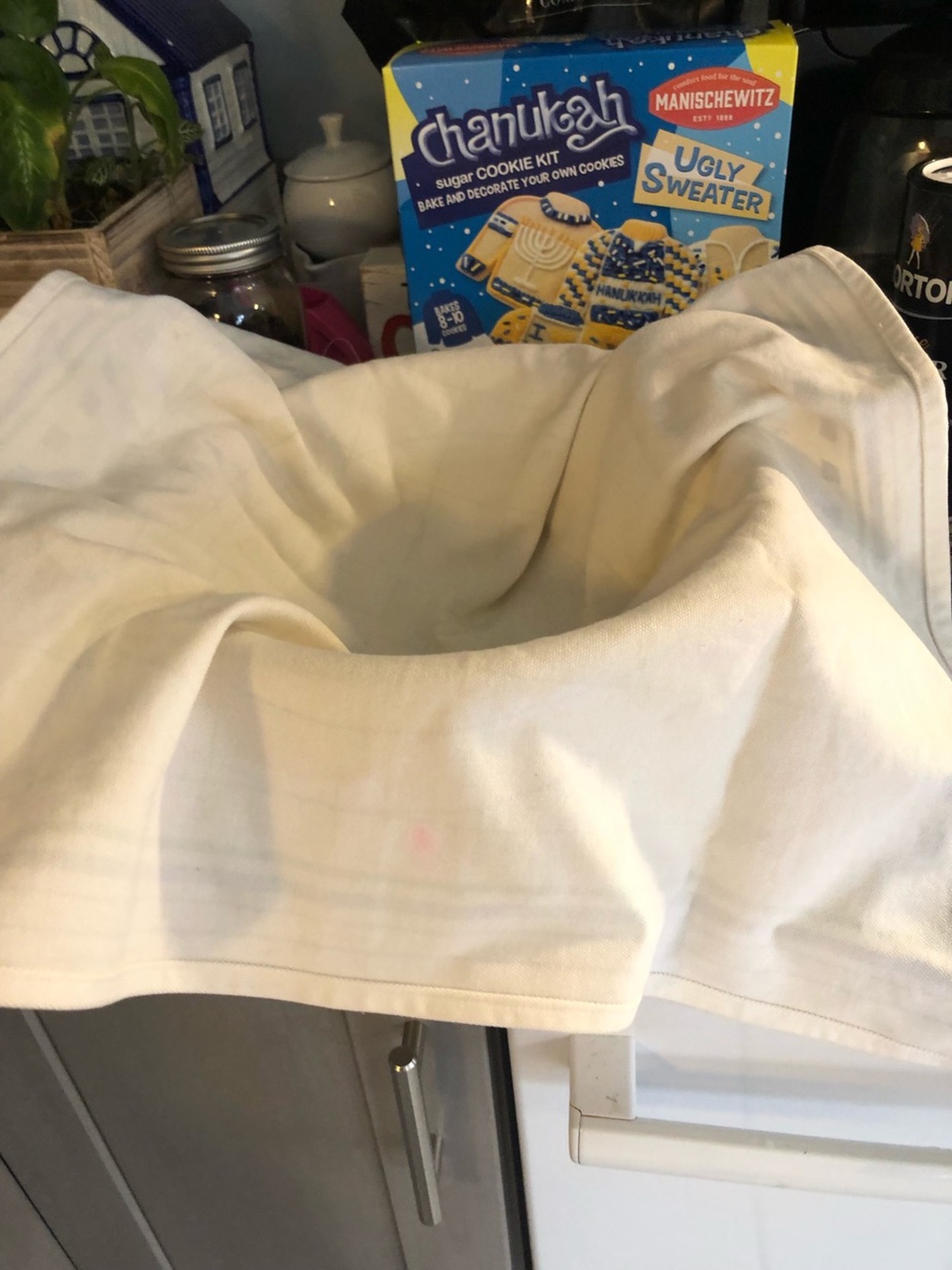 Pour the mixture in, wrap it up, and squeeze like you’ve never squeezed before. Get all that liquid out, but make sure the potato/onion shreds stay in the cloth. When you are done, the bowl will look like this. Now, the internet tells me that after a few minutes, I can pour off the liquid and some potato starch sludge remains on the bottom. The potato starch is great to keep in the mixture as a binder. However, I did not get much potato starch (probably because I used pastry cloth - oh well). 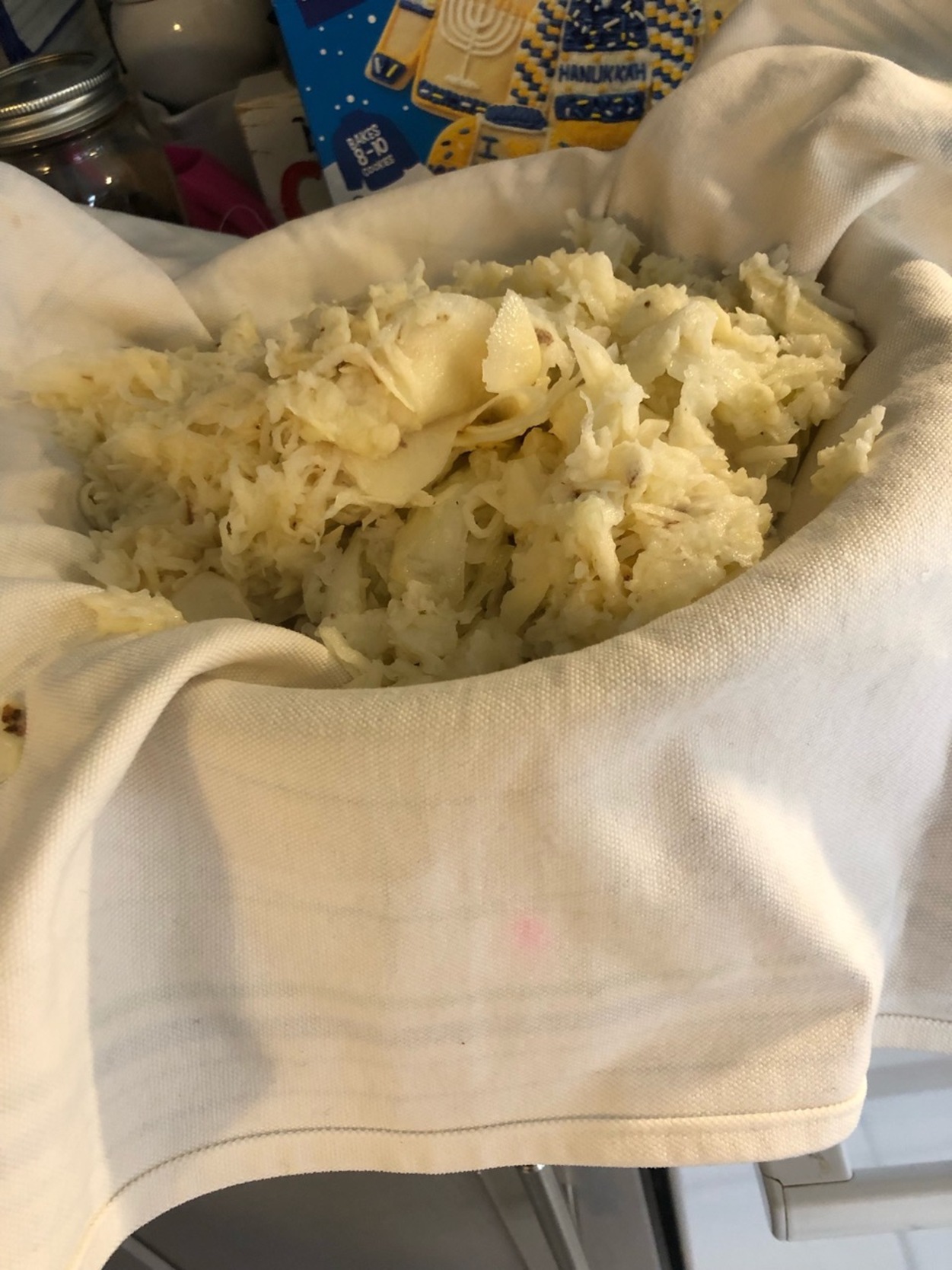 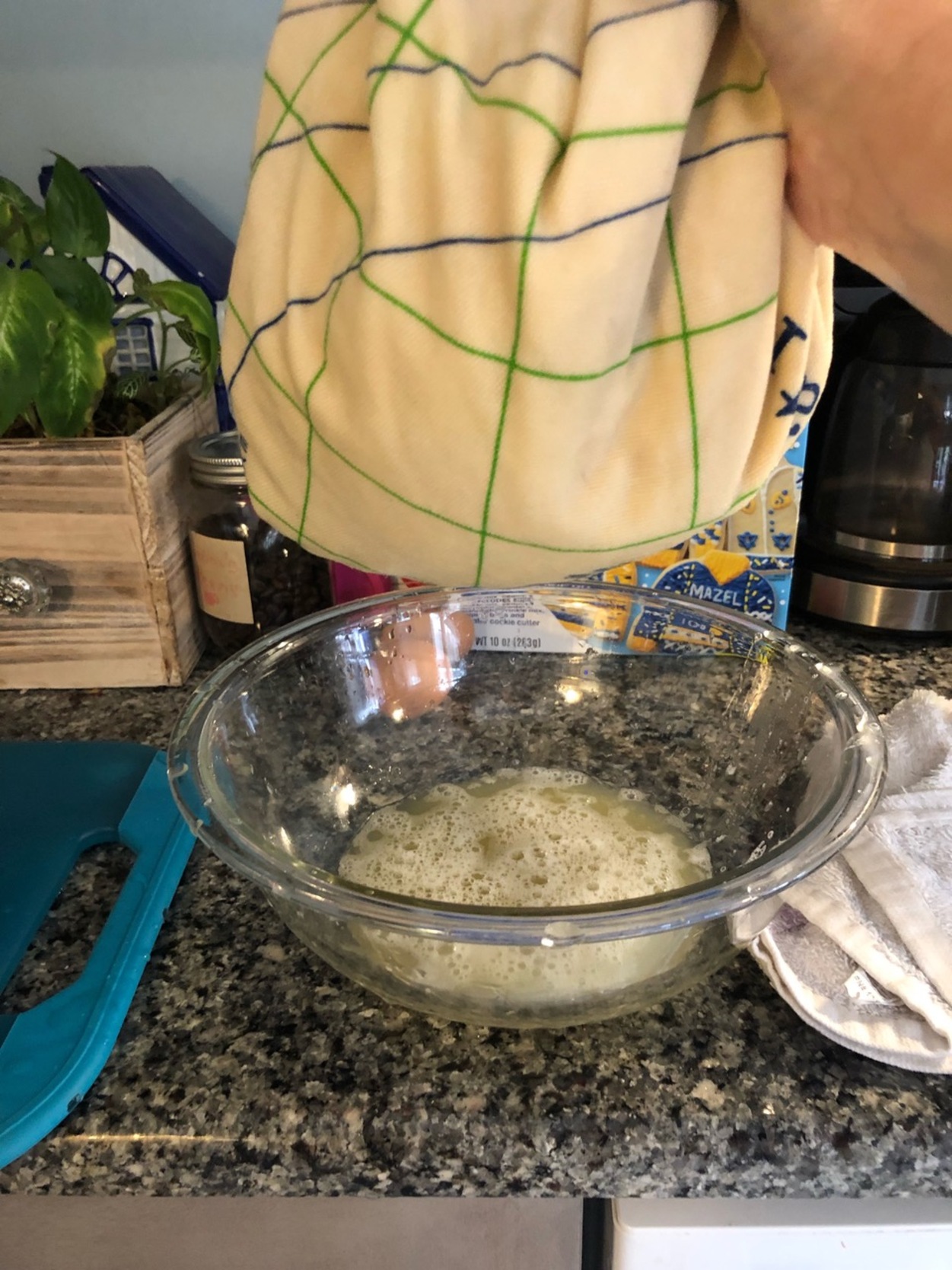 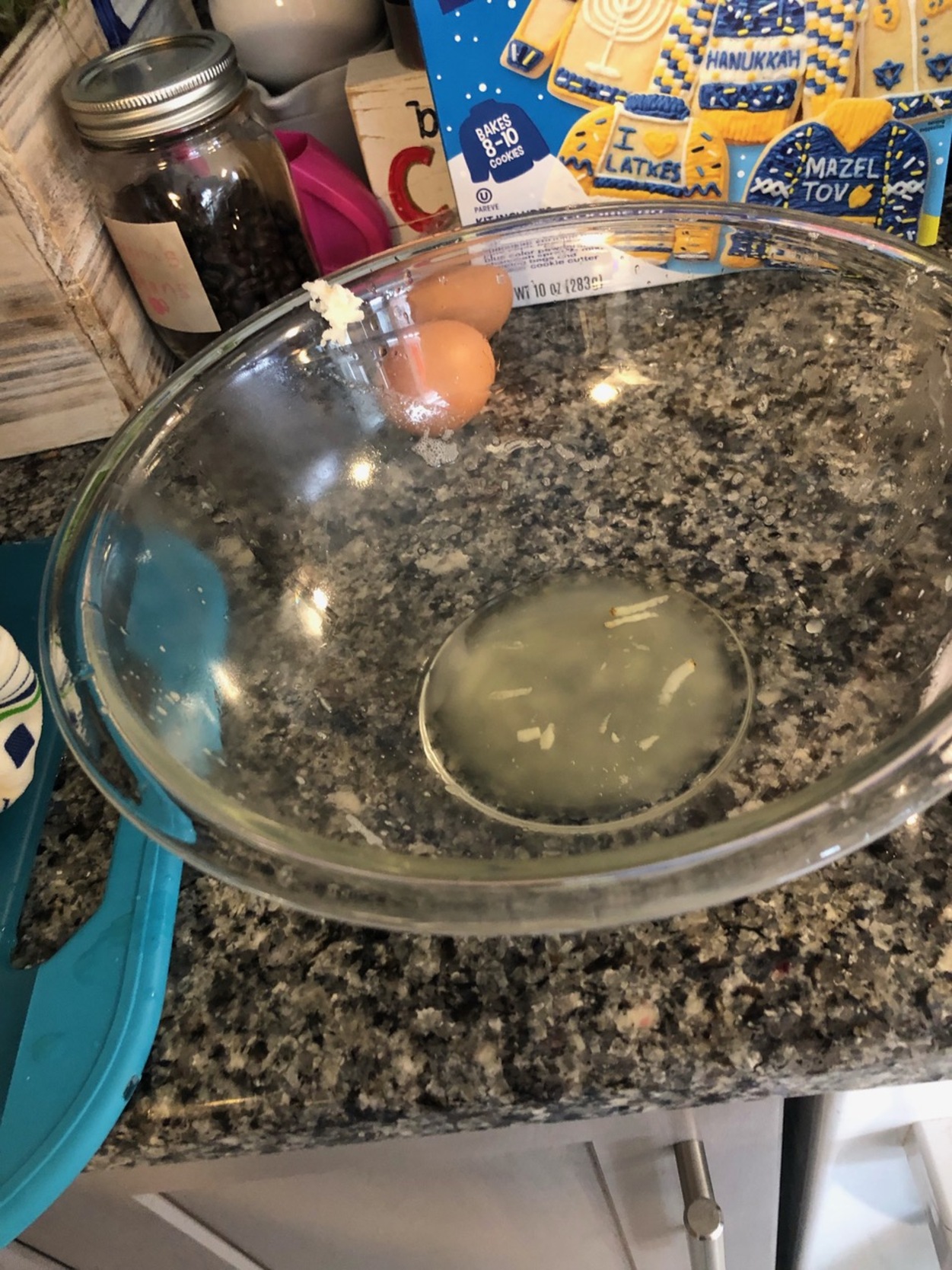 Now is the time to preheat the oil. Fill the bottom of a deep frying pan with canola oil and heat it on medium to medium high heat. 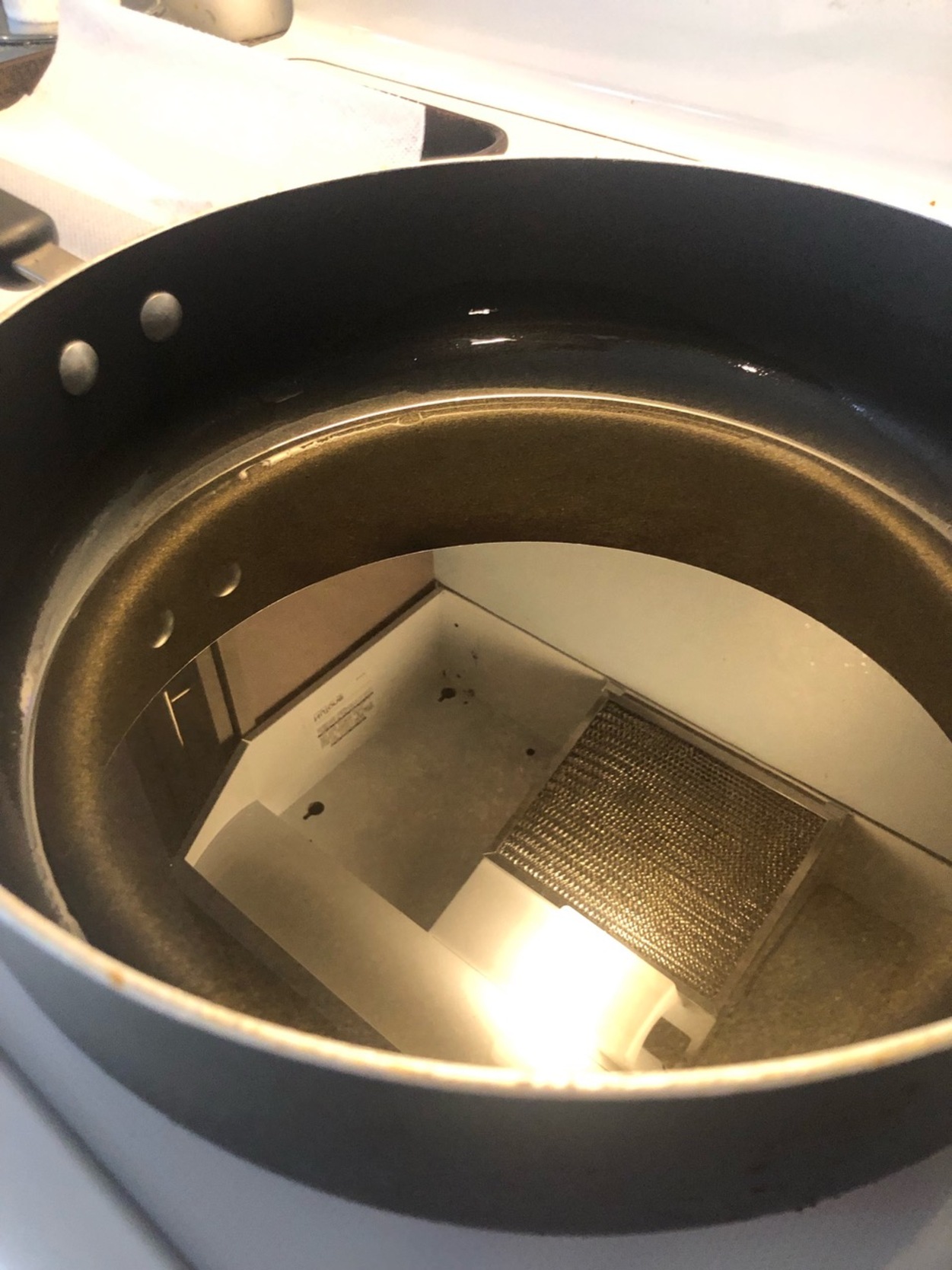 Now add the rest of the ingredients to the mixture. I added 2.5 tablespoons of panko, 1.5 teaspoons of salt, 2 eggs, and some liberal grinds of pepper. Mix it all together with a wooden spoon. 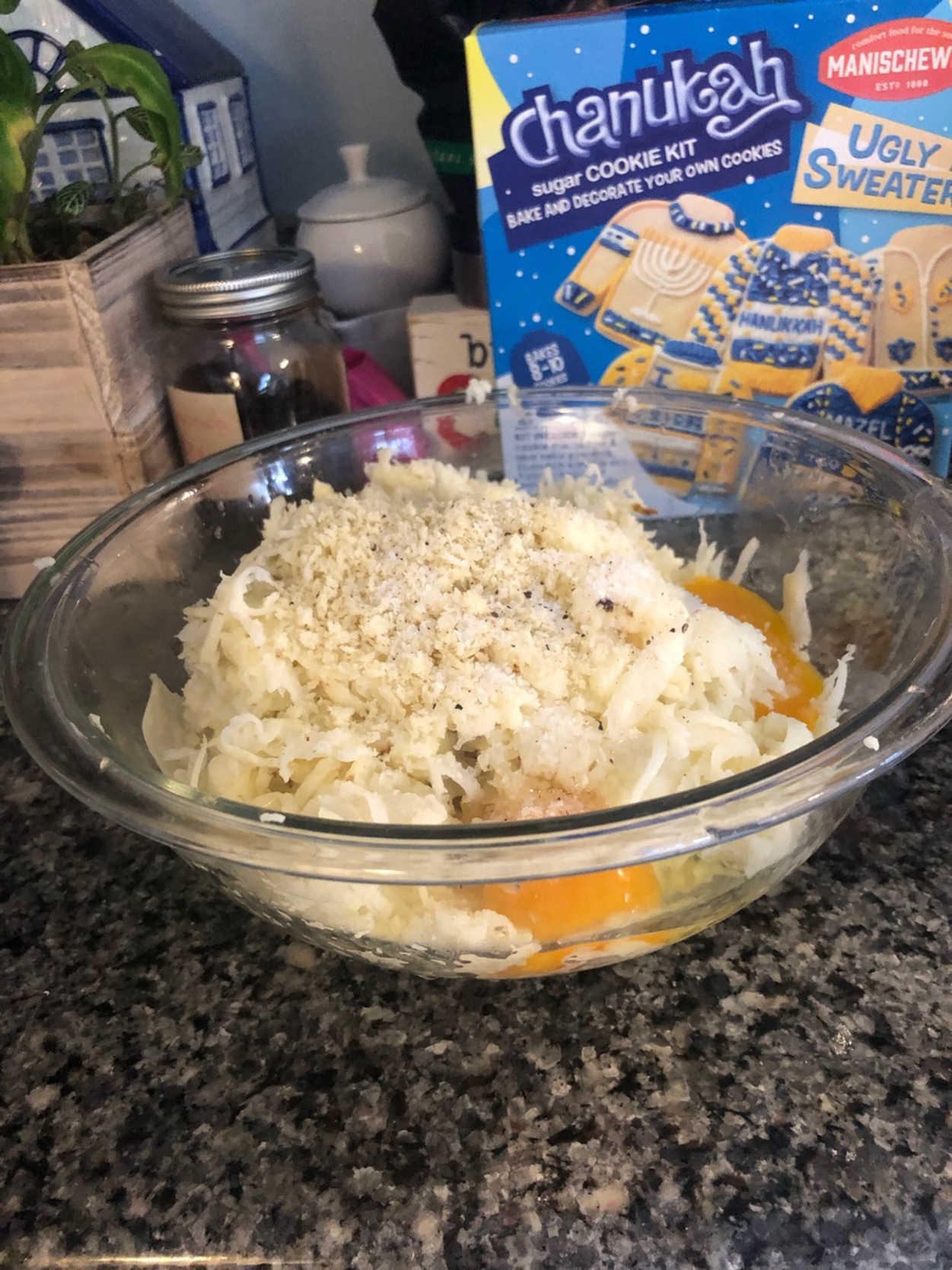 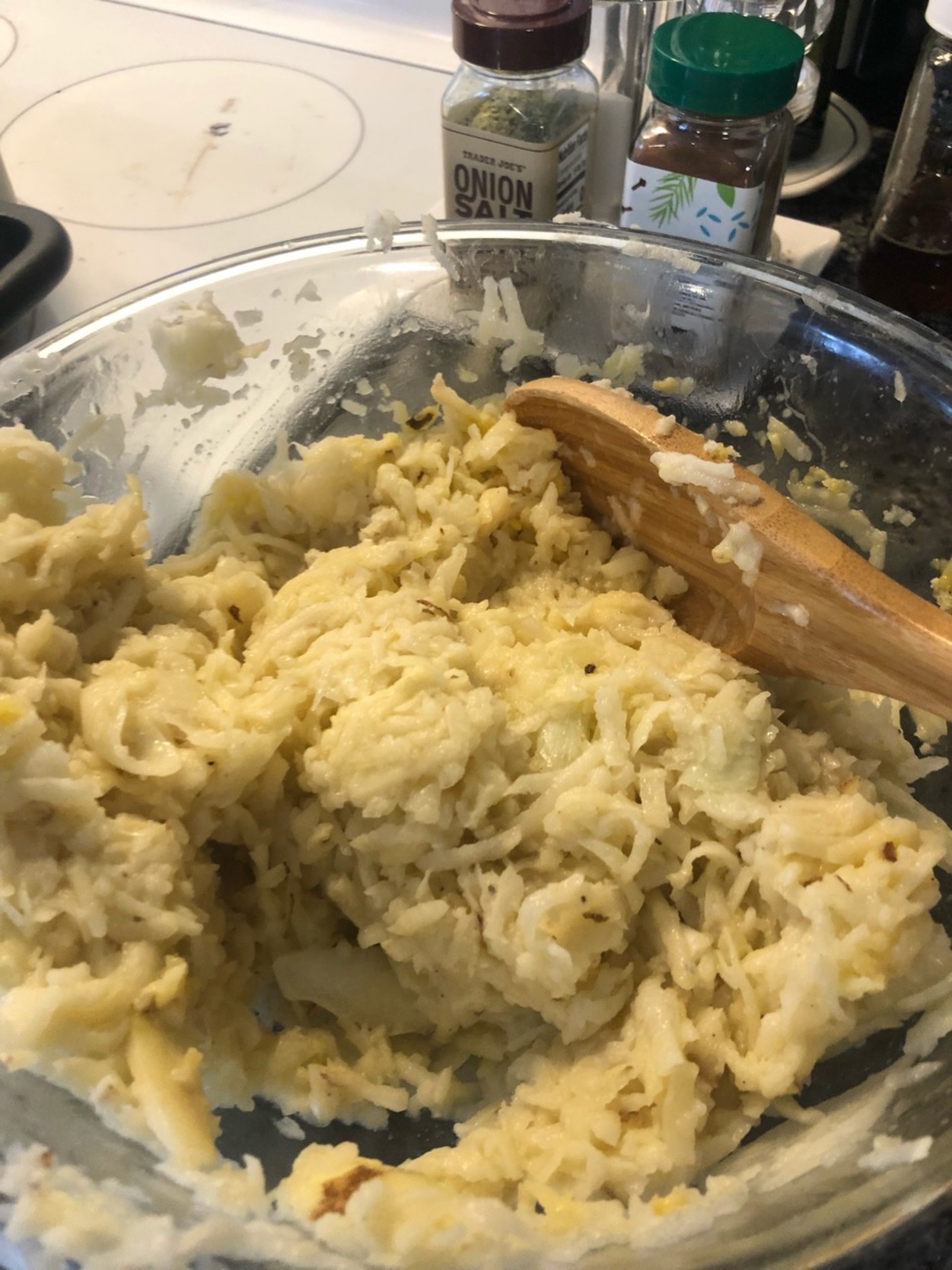 Now your oil should be hot and bubbly. Note of caution - be careful - the oil will be hot and splattery. Try to slide latkes to flip as opposed to aggressive flipping. Use a quarter or third cup measuring cup to scoop in however many latkes fit comfortably in your pan. Once they are in, squish them down with your spatula to flatten. 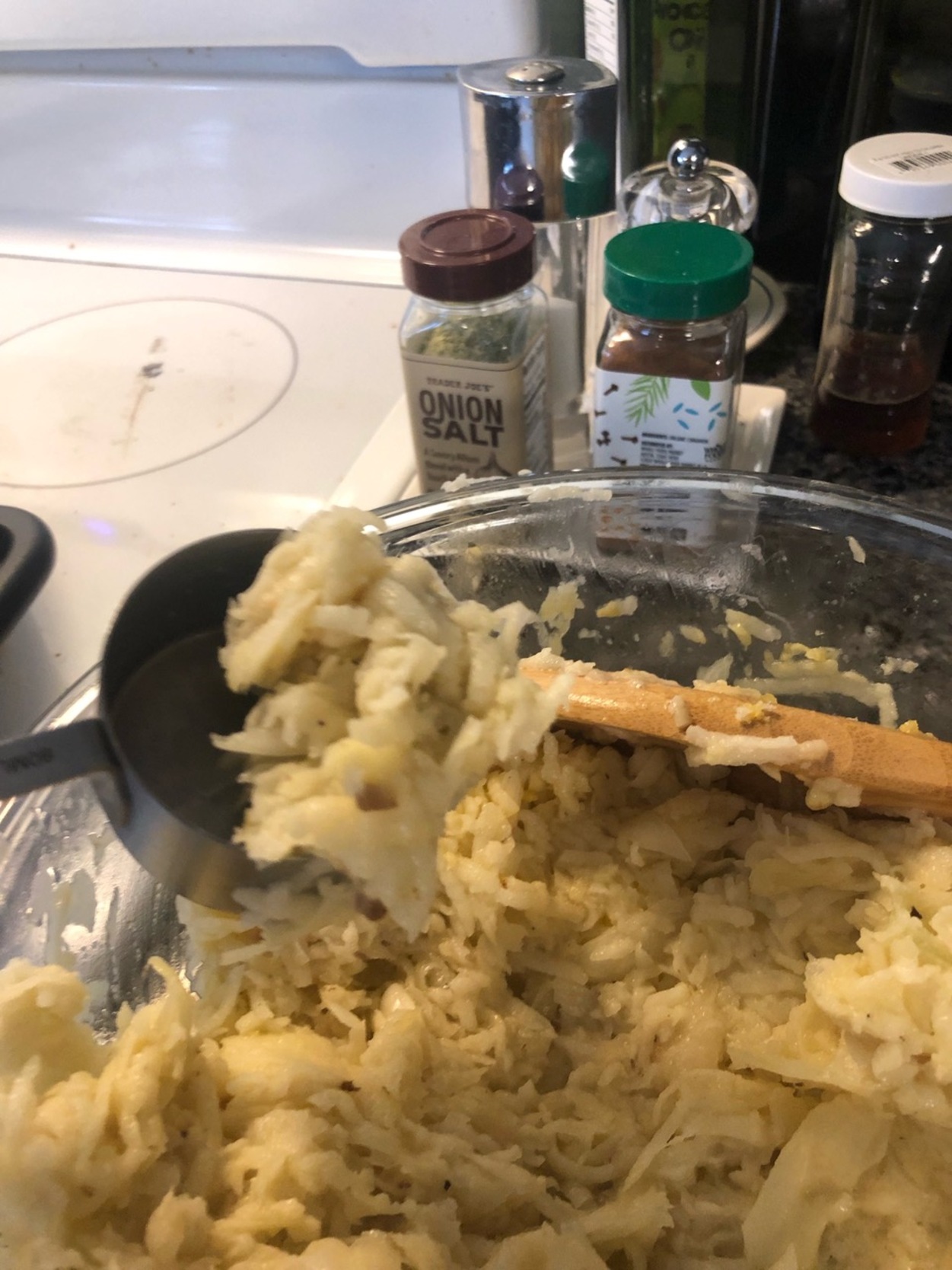 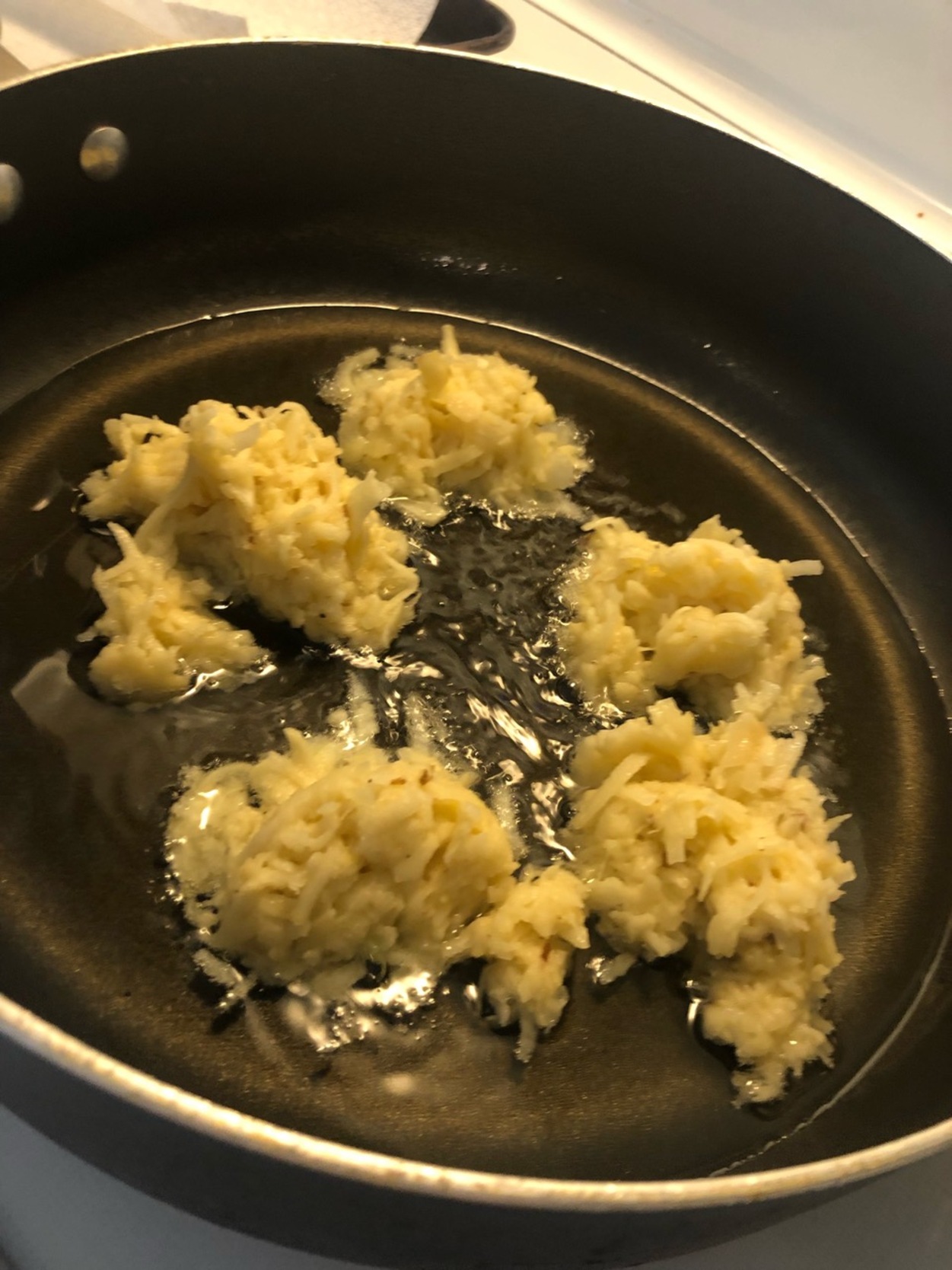 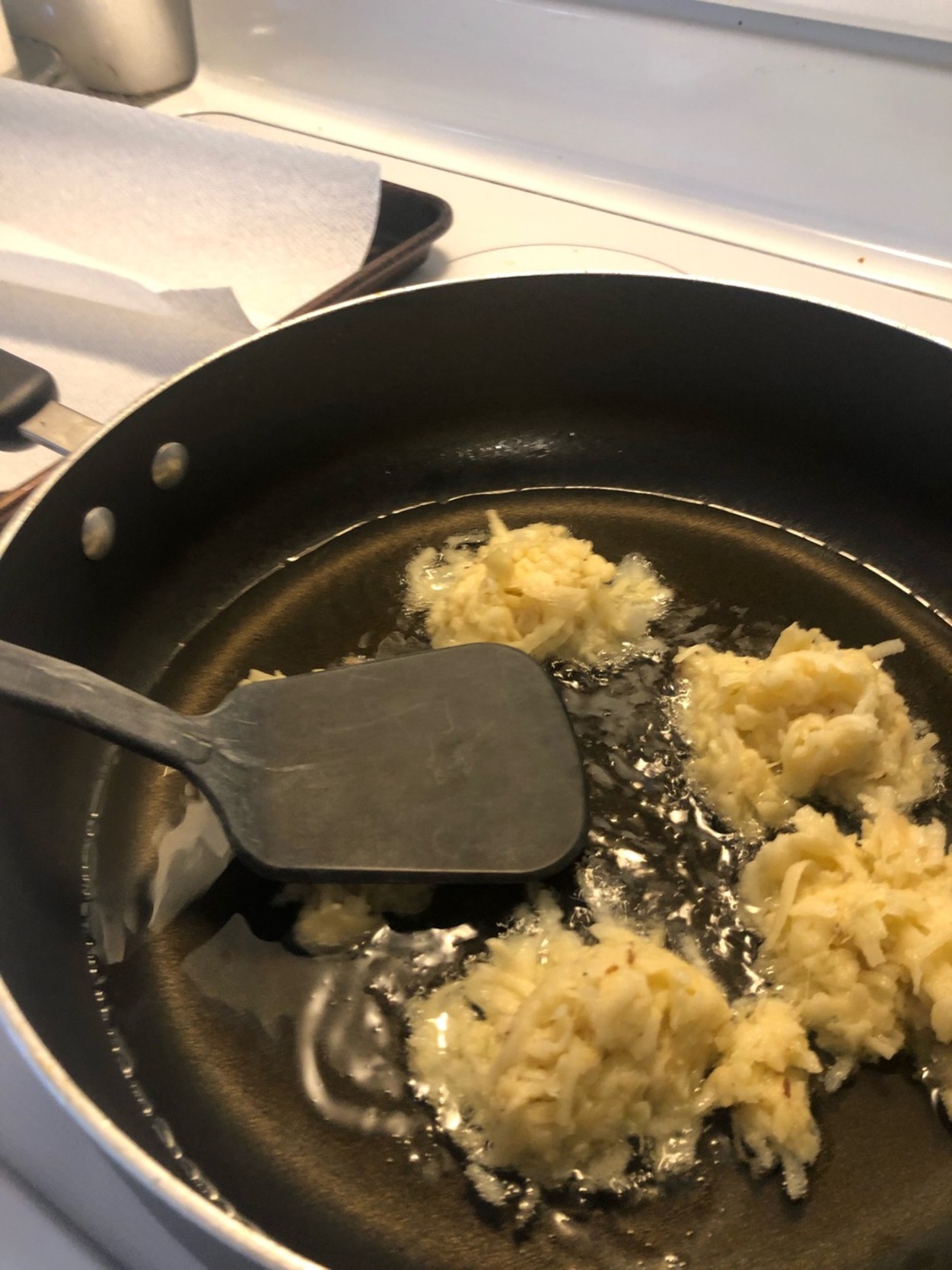 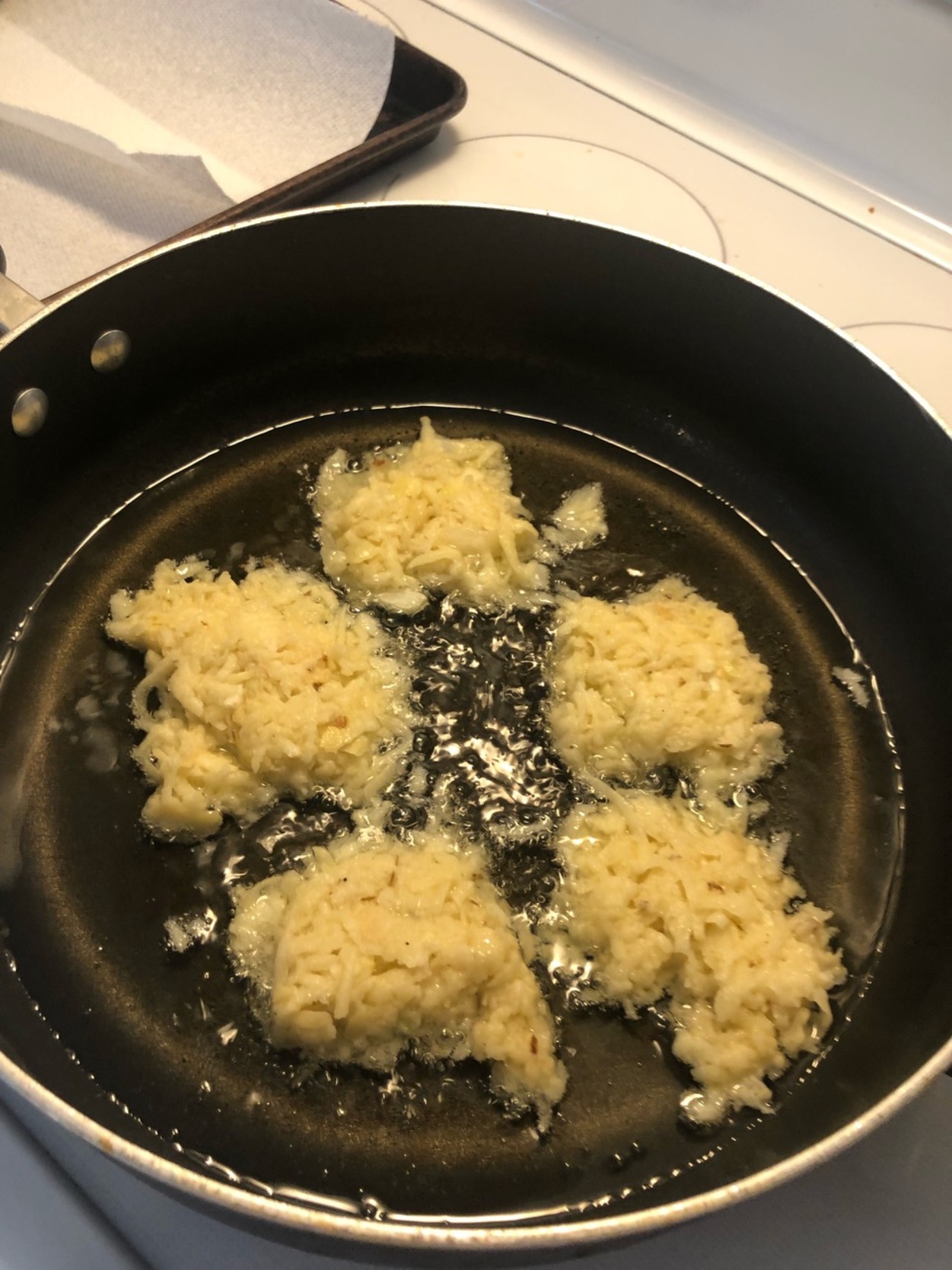 Cook latkes on the first side for about five minutes, starting to check when the edges turn brown. Turn on your oven vent. Don’t burn yourself! 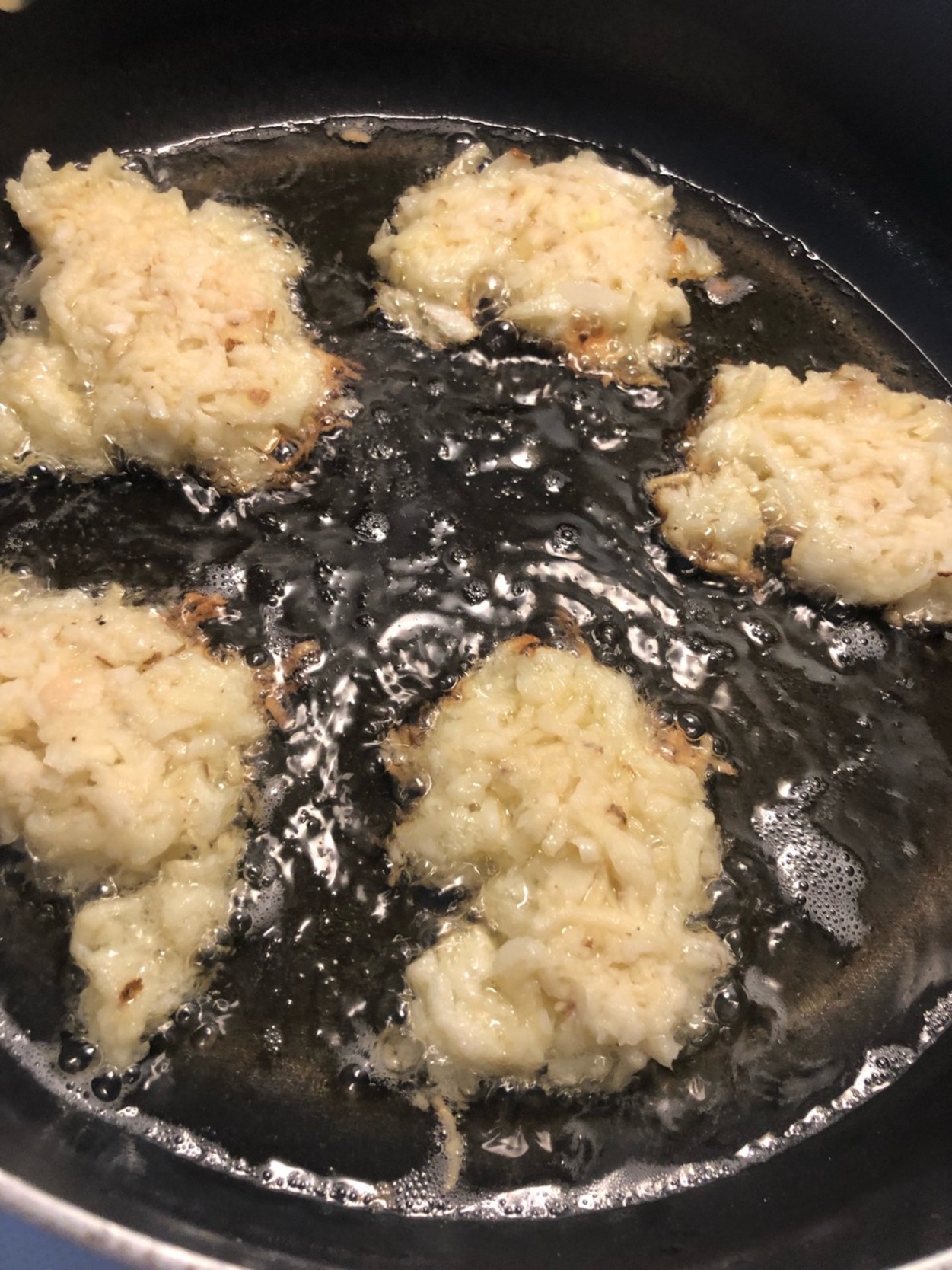 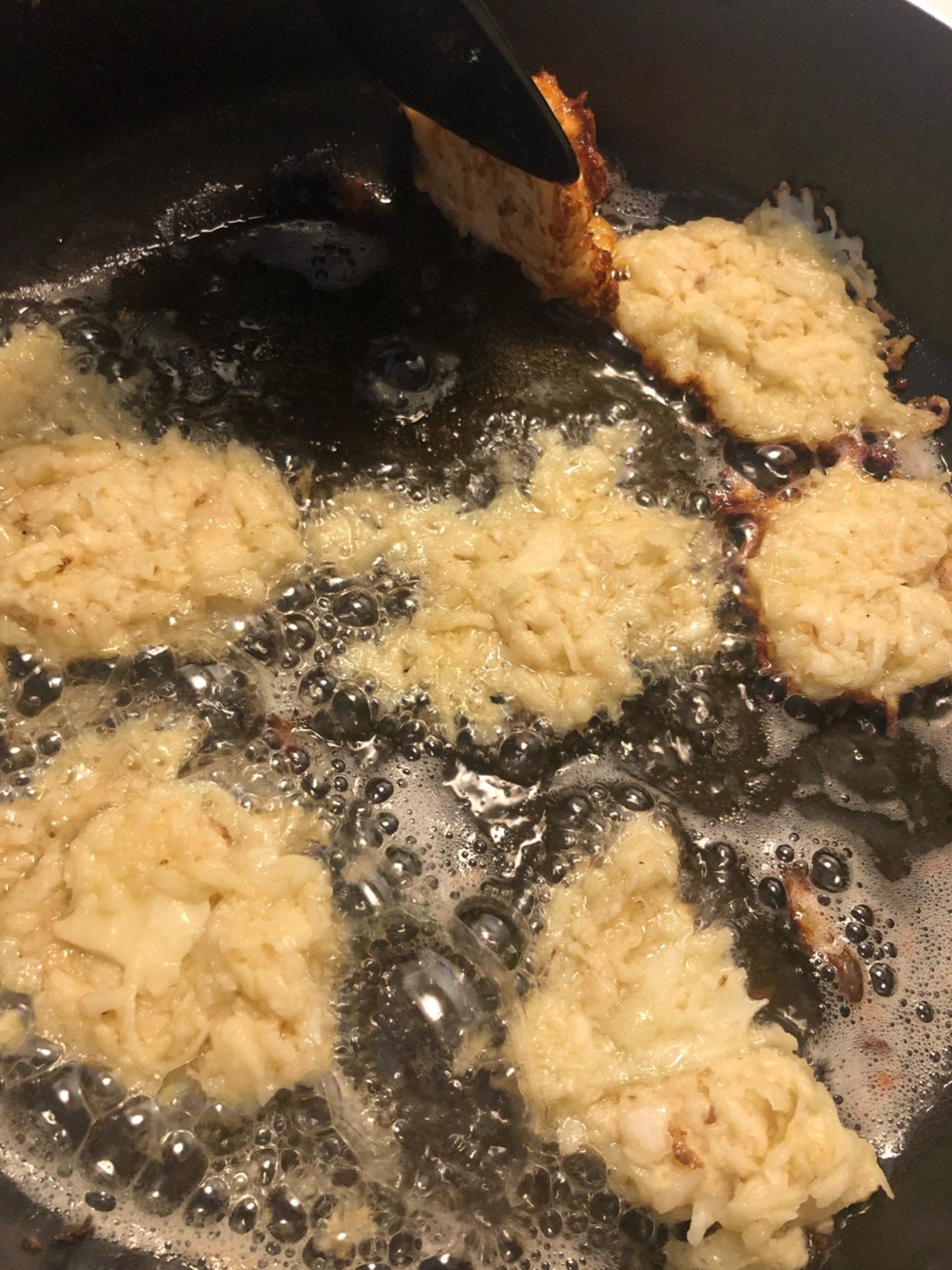 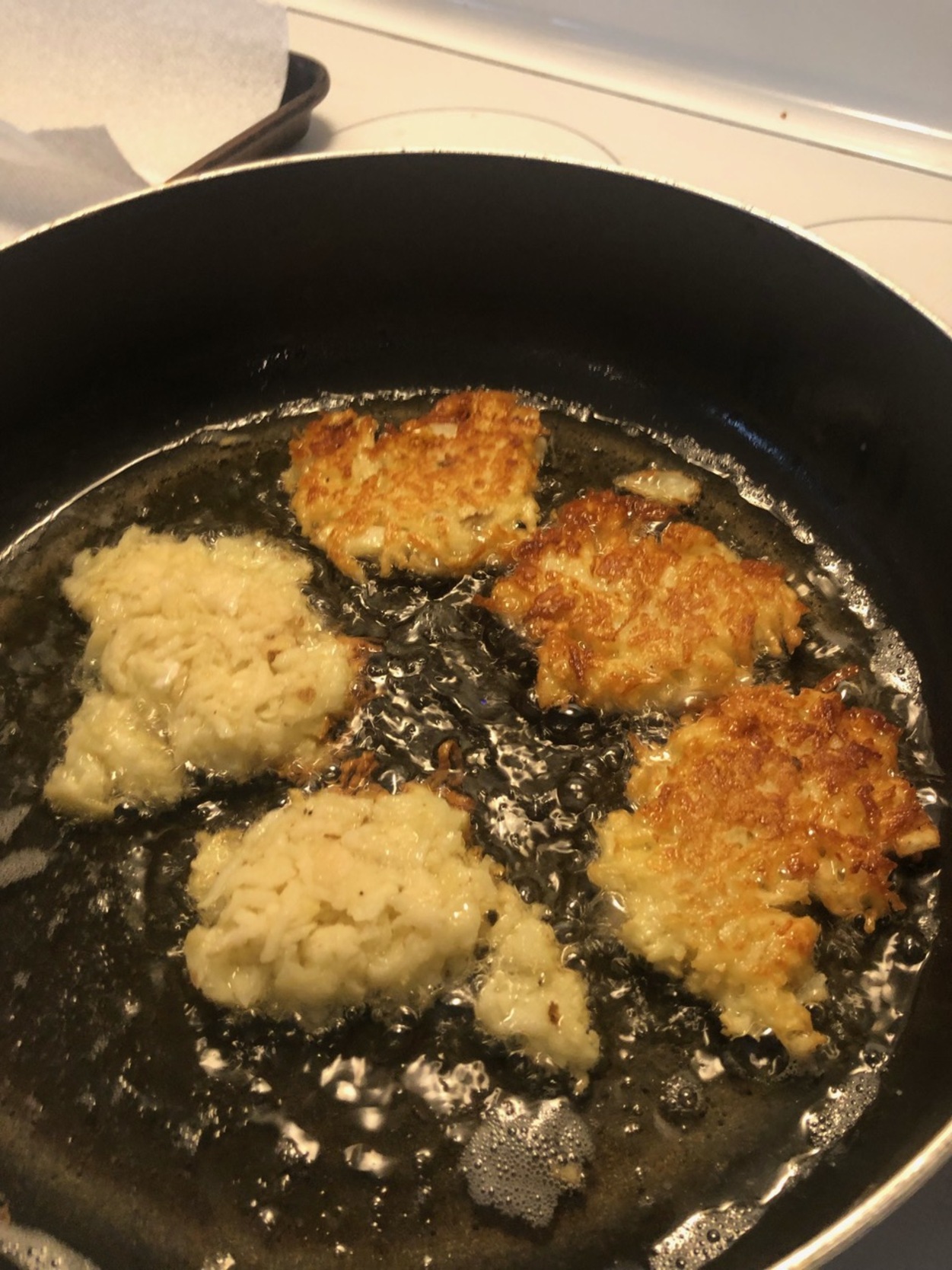 Cook for four of five more minutes on the second side - then your latkes are done. I used this strainer to shake off some excess oil, but you don’t have to. Transfer latkes to drain on paper towels, then to a cooling rack if you like. I cooked my latkes to various degrees of doneness. Some like their latkes lightly crispy, some (like me) like the burnt crispy latke schmutz. Serve your latkes hot with sour cream and applesauce. Take a shower (you smell like latkes!) and open all your windows! If you want to reheat latkes, do it at 300 degrees for about 10 minutes in the oven. Have fun! 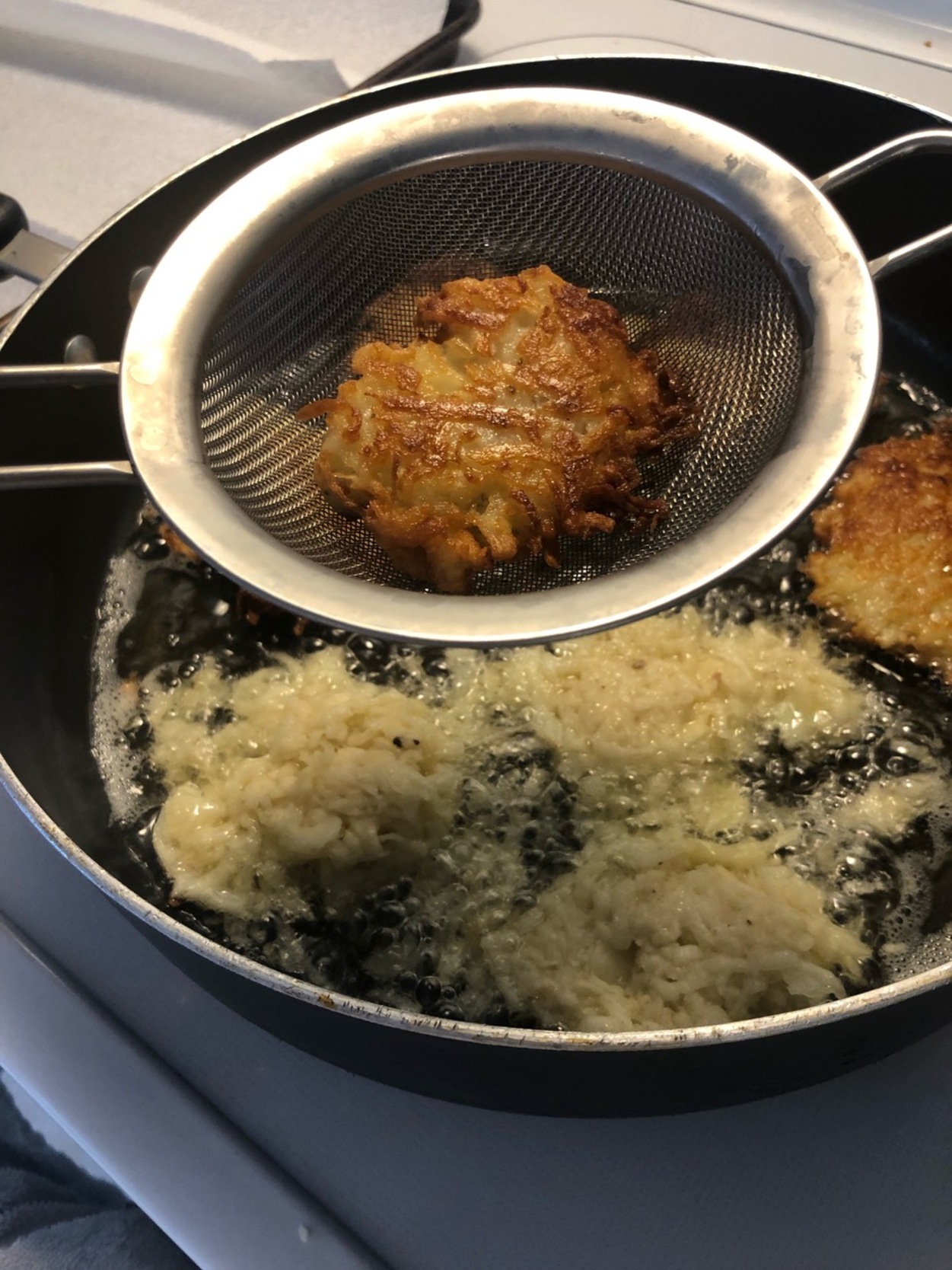 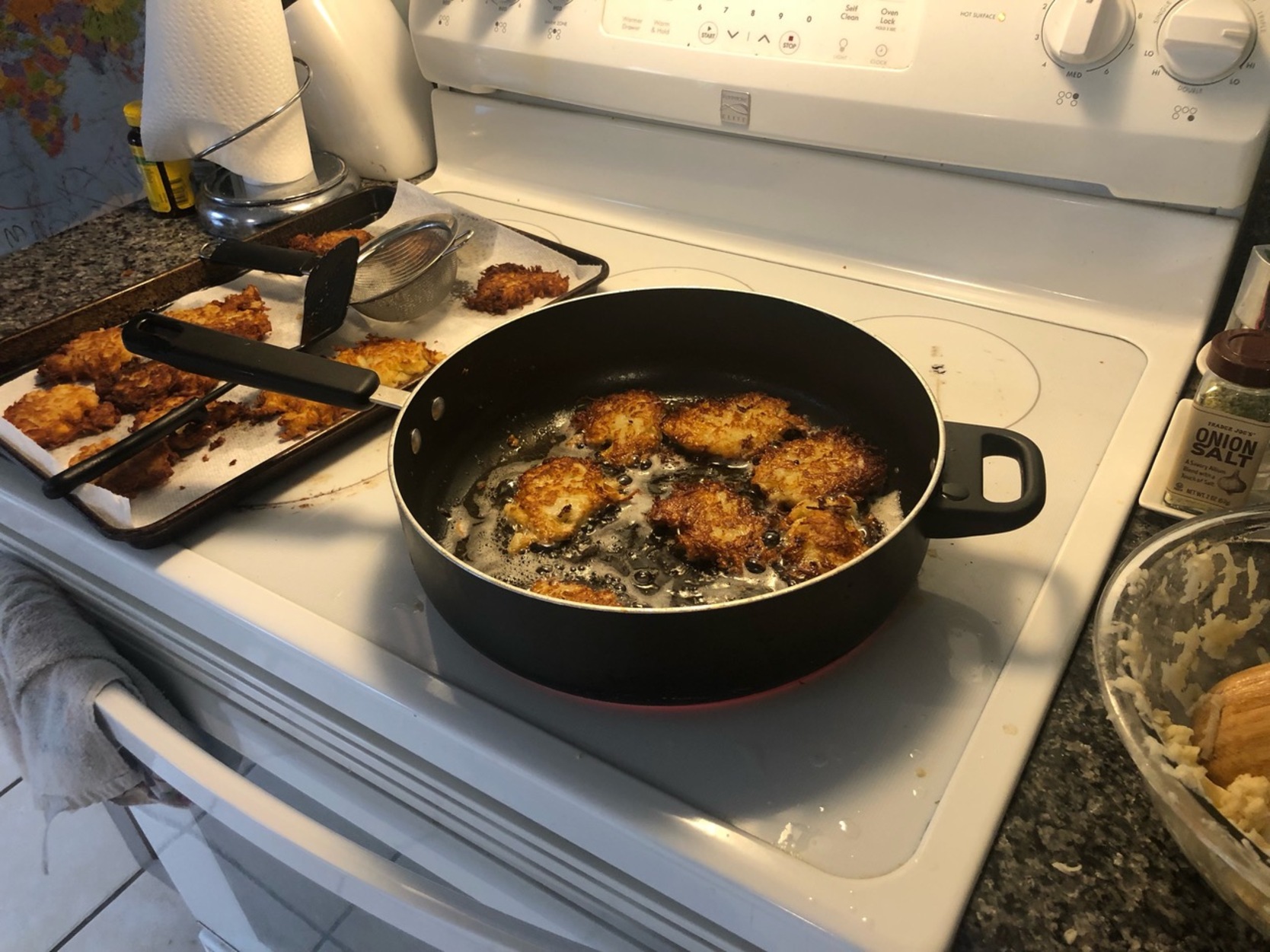 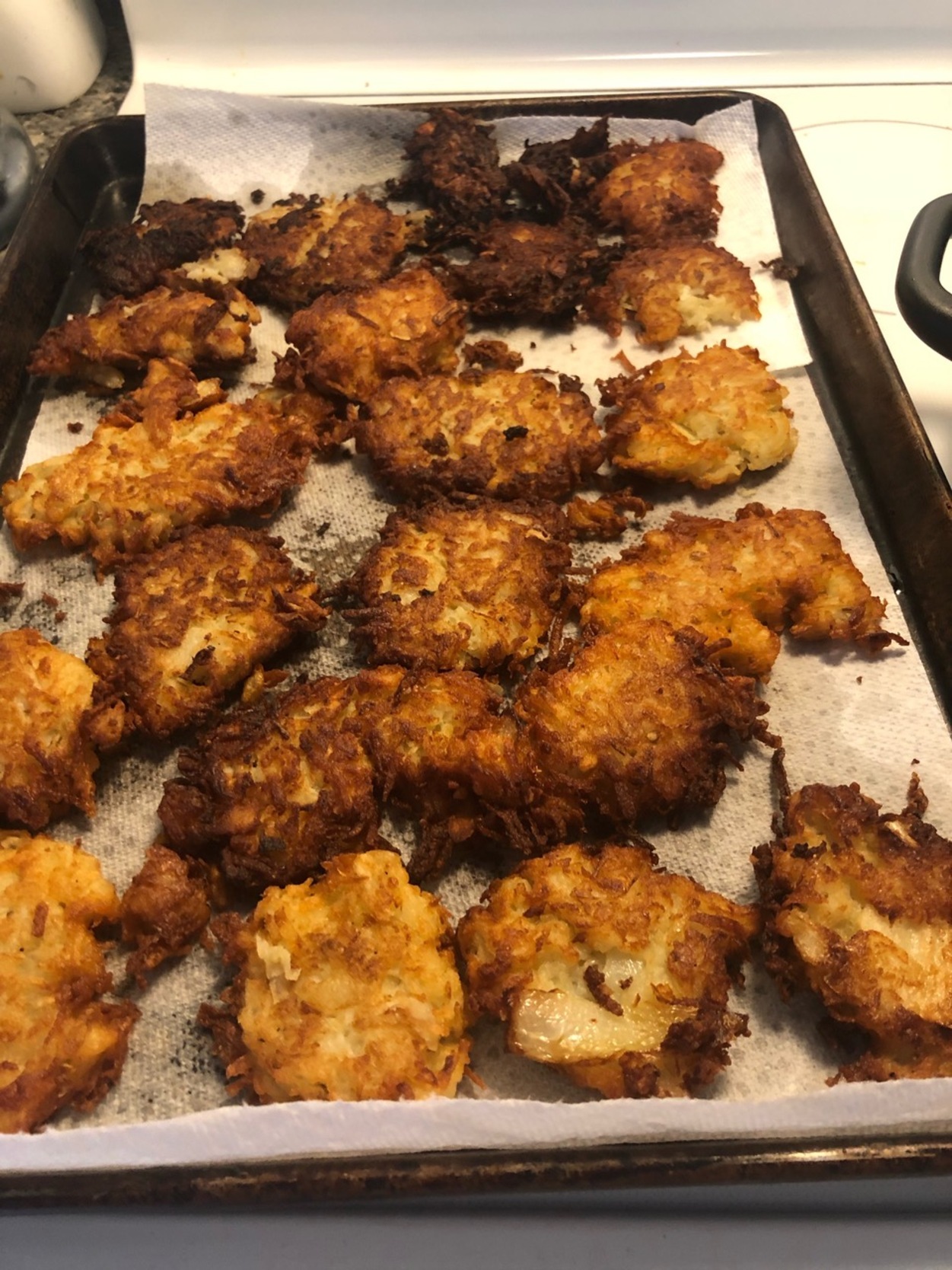 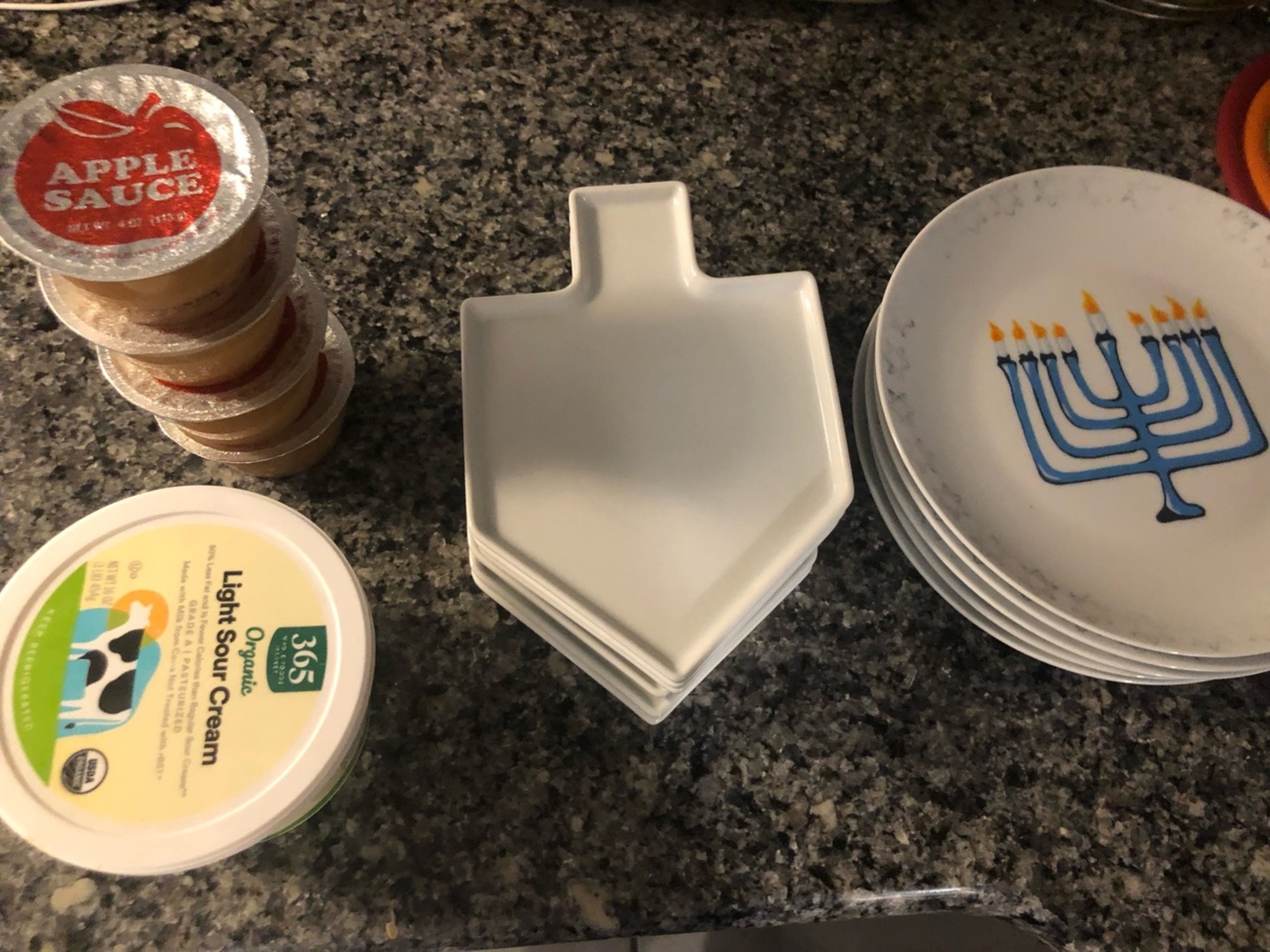