A quick snapshot of Evan at almost two and a half years that I don't want to forget.

Evan loves his crib. Even though he is a climber and an explorer, he has never shown signs of wanting to leave his crib. He snuggles up on his tummy in his sleep sack with his four stuffed buddies - Curious George, Pooh Bear, Teddy, and Bunny - snuggles them underneath his body and scrunches down the bed to the end of the crib, with his feet sticking out the bars. We hear the rattle in Pooh Bear jingle as Evan turns over.

We need his crib for the girls, so it is an exciting adventure to share a room with Seth. Ever the good sport, always wanting to do what Seth does, Evan says "yes" and scrambles up into his bed, after the shared naughty jubilation of jumping on his new mattress with Seth. Big brother helps get little brother excited for his first night in the bed. Daddy says good night and we wait.

Never actually calling for me, but chattering away, Evan sits propped up in his new bed against the headboard, clutching his four stuffed buddies tightly. Fiddling with the blankets. Looking around, listening to "osh" (ocean sound machine) and watching Seth's starfish project light on the ceiling. I peek in, we blow kisses. Later, I go back in and show him how to lie down on his pillow under the covers. He has only ever slept on his tummy. He wants to "hold" his pillow instead of lie on it. I leave, go back in, and he is sitting up again, ever stoic. I turn on osh and starfish again, give him a fresh diaper, he feels "much better." I sing him his songs, Sunshine and Close Eyes.

A couple times back and forth between lying down (with my help) and sitting up. I ask him if he wants to lie on his tummy, he says no. He is determined to fall asleep like a big boy! He says "good night." I love him fiercely. His little face, so serious as he tries to successfully complete his task. He's a little scared and a little filled with wonder. Finally, I go in, and find he has decided on a compromise. He has flipped forward and fallen asleep on his tummy, with his stuffed buddies. But in his big boy bed! What a big boy.

Photographic evidence, of Evan asleep in his big boy bed. And below is Seth, who had been asleep since we first turned out the light. 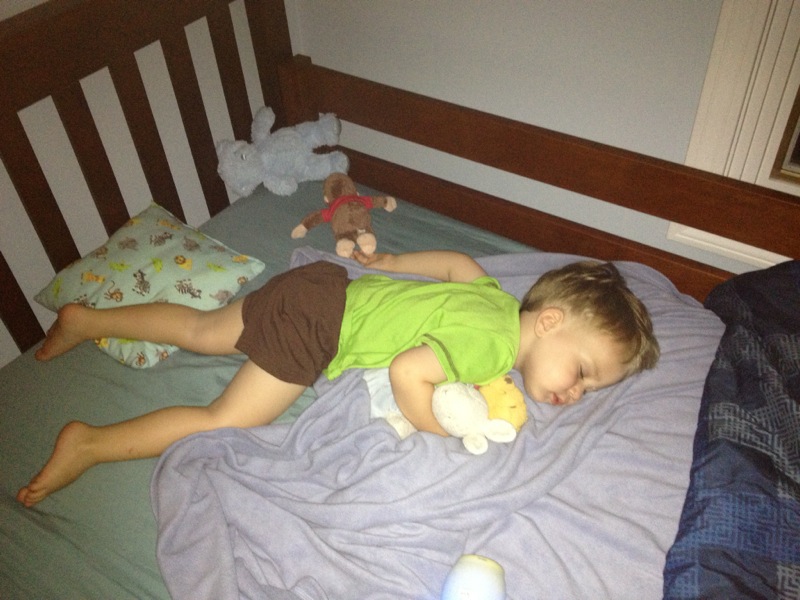 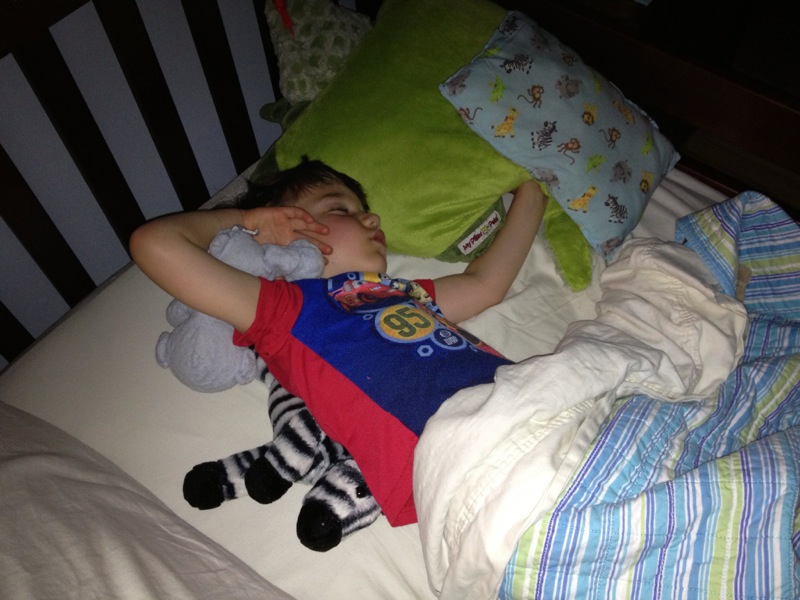 As I write this story, I realize how much Win would have liked this. I think Evan has inherited Papa's determination and his ability to think outside the box, as well as his desire to tell a good story.